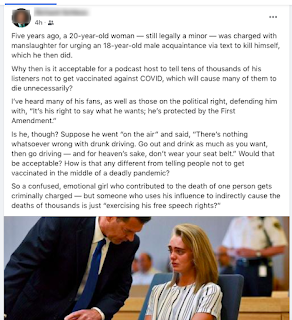 The internet can be a tricky place to navigate, we are inundated with memes, posts, comments and an assortment of arguments that incite us to respond with a sense of urgency.

Sometimes, we forget that when we read or see something online, and content or criticism makes us feel angry there are things we can - and should do - to make sure we don't become reactionary. The internet by its nature encourages one to be reactionary, so it is very important responsible adults do not let that happen.

When reading something online, or a criticism someone posts about your content - do these two things.

Now that we have taken a step back, re-set our brains and understand the important of remaining calm the next thing we can remind ourselves is just because people have different ideas does not mean they are 'bad' 'stupid' or need to be 'called out'. It simply means they think differently from you - and that is okay. After all, who wants to live in a world where we all think alike. Not me.

For those who do know me, you know that I am on the Autism spectrum which is why I prefer not to comment on people's posts. The problem I have is that I am too logical for most people, and when I point out a logical error it isn't intended to try to make any person feel bad about themself. What I find is they are judging themselves much more harshly than I am, in fact I am not judging them at all which is something other's don't understand about me.

So lets get to it, I am going to look at the argument made in the image above and perform a logical analysis of it.

This argument here relies on the following logical fallacy: FalseEquivalence. The False Equivalence Fallacy is very common in social media where people compare two situations that are similar in some respects, but significantly different in other respects. This argument is called analogical argument following this pattern:  a::b, a:x therefore b:x.

a. Michelle Carter, 20 year old female who encouraged her boyfriend to take his own life. Michelle was sentenced to 2.5 years in prison, that time was reduced to 15 months and she got 5 years probation.

The symbolic representation of the argument informs us that the analogy is true to the degree that a and b are similar to each other.

A = Michelle Carter an act encouraged a specific, emotionally unstable, suicidal person to end their life.

B = Online Pod-caster an act encouraged general audience of listeners who already share most views with the pod-caster, to adopt a harmful belief system about the Covid-19 vaccine which may or may not end their life.

Before we know if we are dealing with a flawed argument, we must make sure to fairly compare apples to apples and oranges to oranges. I made this easy by color coding the apples, the oranges, the verb and the outcome. Michelle Carter and Online Pod-casters are the apples. The problem with our apples,  is in two Latin term called mens rea and actus rea. Watch the video below if you do not know what these terms mean.

Now that you've watched the video hopefully you can see that the analogy falls apart at Mens Rea. The reason is this, online podcasters who share misinformation about the Covid vaccine are not intending to cause harm. Most, if not all of them, genuinely believe what they are saying is true and they sincerely believe they are helping people. The same cannot be said about Michelle Carter who knew what she was doing was morally wrong. Now, if we have a podcaster spreading misinformation about Covid and that person knows the information to be false, and spreads it with the goal of increasing the covid death rate then the argument would be stronger.

Looking at the oranges, in the first situation the victim is a specific, emotionally unstable individual who tried to kill himself many times in the past. This one individual is compared to the podcast audience, a group of people who listen to the host, the majority already agreeing with him in most of his political conservative views, most of them already anti-vax. This is based on the premise that people chose to listen to podcasters because they already have commonalities. Liberals typically don't watch Fox news or listen to Joe Rogan, and conservatives typically do not choose to get their news from MSNBC or Anderson Cooper. In the case of group two, of those that are not vaccinated and contract covid, most of them will not die. The lack of the vaccine means they are probably much more likely to die, but it doesn't guarantee death. Hopefully we can see that the oranges are not the same at all. One is an individual, the other is a group, one is mentally unstable while the other are just people who already share the hosts misguided views. The oranges are vastly different from each other, that the argument falls into the logical fallacy of false equivalence and faulty analogy. 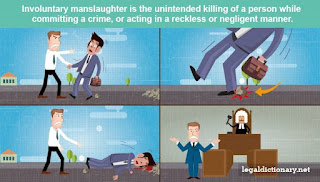 1. Criminally negligent manslaughter - a killing caused by a severely negligent act or failure to act, like failing to feed your baby.

2. Misdemeanor manslaughter - a killing caused by or during the commission of a misdemeanor crime.

The podcaster  cannot be charged with misdemeanor manslaughter because he/she was not committing a crime by spreading misinformation. To date, it is not a crime to have uninformed opinions and to share them. As much as we don't like it, that is the law. And if we think about it - haven't all of us believed untrue things? Haven't we all maybe held a belief that was harmful? The difference here is the podcaster misinformation is magnified while the rest of us are mostly unaware of our own misinformation. Also, a common defense for criminal negligence is that the negligence resulting in someone's death must rise to the level of being gross negligence. If the defendant's actions were only slightly negligent, the case is dismissed. Arguing that the victim was negligent as well is a defense because the law also presumes that each individual has a duty to behave reasonably. Are the listeners of the podcast being reasonable? Clearly they too are spreading misinformation and they are using poor judgement. The podcaster is throwing fuel on the fire, but that does not rise to the level of a manslaughter. I know many of you do not want to hear this but how you "feel" about the podcaster is irrelevant, and its also irrelevant how we "feel" about Michelle Carter. Facts are facts, the law is the law and this is what it means to live in a Democracy. Logic isn't warm, it isn't comforting and it doesn't care how you feel for the same reason math doesn't care how you feel. Logic is just a way of arriving at truth, nothing more or less. Remember that before making a decision to get triggered that I wrote something you disagree with.

I hope what people understand when they see bad arguments and memes, is that most of these social issues that affect us as individuals and our society are multi-faceted, complex and have many moving parts we can't follow. Frankly, for many it's overwhelmingly difficult to understand these issues let alone address them all. The appeal of these types of arguments and memes comes from the way they take complexities and distill their essences into easily digestible and communicable statements and claims. Watch out for them because they are literally everywhere - Republicans and Democrats are surprisingly similar to each other in the amount of bad arguments and bull crap they spread through social media.

Also, when we are not mindful of good logic and good argumentation, remember that the enemy is watching you. The conservatives read arguments like this, and will use it against the left. The lesson is this - keep making arguments and keep them as clean as you can. If you don't, it could potentially backfire.

If there is a meme or argument you would like me to deductively analyse, feel free to send a request. Be mindful though - if you are the 'sensitive' type, I don't care how you feel about any of these issues. This isn't to say I don't care about people because I do, but I will never factor your beliefs, values, norms or emotions when analyzing an argument because they are irrelevant. <script async src="https://pagead2.googlesyndication.com/pagead/js/adsbygoogle.js?client=ca-pub-1975535236741920"
crossorigin="anonymous"></script>