In another shockingly lazy blog, Paul Zachary Myers slammed everyone who is not a feminist, stating they are no better than mass murderer, woman-hating Marc Lépine who targeted, and executed several women at the École Polytechnique de Montréal. It is obvious that PZ Meyers did not read my last blog about him, and has no intention to improve his writing, critical thinking, or one dimensional analysis of the facts. He has once again published an overly simplistic, brazenly superficial blog, calling all of us (those who do not subscribe to his brand of feminism) a bunch of lunatics who secretly want to embark in a murderous rampage against women.

Back Ground
Marc Lépine ( né Gamil Rodrigue Liass Gharbi) was born to Canadian woman, Monique Lépine and Algerian father.  His father was authoritarian, jealous, possessive, abusive and contemptuous of women, treating his mother like a secretary and slapping her in the face anytime her writing had a typo. Sr. Gharbi believed that women were only intended to serve men. He was neglectful, cruel and abusive towards his son.

After severely beating his son so badly that the boy had welts all over his body for a week, the mother finally left her husband and filed for divorce. Gamil changed his name to Marc Lépine out of hatred for his father.

Unfortunately, he had absorbed much of his father’s Islamic views about women and authoritarian personality. He was shy, secretive, and awkward with women.

Lépine started a few university degrees, only to drop out or flunk out. In April 1989 he met with a university admissions officer, and complained about how women were taking over the job market from men. Like his father, he believed that a woman's role was to stay at home, serve men, and care for children.

On Wednesday December 6, 1989, Lépine walked into the École Polytechnique de Montréal. There, he entered a second-floor classroom where he separated the men and women and then ordered the approximately fifty men to leave. Claiming that he was fighting feminism, he shot the nine women who remained, killing six and injuring the rest. After this, Lépine moved to other areas of the building, including the cafeteria, corridors and another classroom. A total of fourteen women (twelve engineering students, one nursing student, and one university employee) were killed, and four men and ten women injured before Lépine turned the gun on himself.


Unlike PZ Meyers, I am not a lazy writer. Any person who does not investigate facts, argue with themselves a little, and try to reconstruct past events has no respect for their readers. I read the Coroner’s report and police investigation before writing this blog. (see images A and B) I also took a good look at Lepin's life so that I could understand what would motivate a man to hate women so much that he felt women should all just die.

PZ Meyers claims, " - to me, every one of them has the name Marc Lépine, and is just hiding it in shame and fear and hatred and cowardice." Goodness me, P.Z. That is a bit harsh dont'cha think? I mean, every single person who does not align themselves with your brand of feminism has a homicidal blood-lusting monster lurking inside, and the only reason they do not come forward with their desire to shoot innocent women is because they are too ashamed of these feelings? Too fearful of others? Too hateful to come out of the closet? Or too cowardly to pull the trigger? 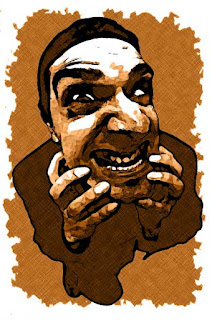 You know, I think we should all just come out and admit it. PZ Meyers is absolutely right. Speaking only for myself of course, I store all of my uzi’s and assault rifles down in my secret lair. Next to my Marc Lépine shrine, I have a Sturm Ruger brand rifle, mini-14 model, .223 calibers Rem., with a 30 cartridge capacity.They are stored right next to my arsenic, tape, and lawn darts.

Every evening I go down there and polish my guns with Renaissance Gun Polish. There is something about the micro-crystalline wax that just really makes them shine.

We should just come out and admit that we all have secret lairs where we fantasize about the torture and death of all of those uppity bitches that took err jeebs! Some of us have even been planning new and different ways of taking away a woman’s right to vote, travel, and drive an automobile. Come on everybody, just admit it. Saudi Arabia has it right!

Marc Lépine had had a stable job for several years, until September 1988.  In the fall of 1986,  while he was employed in that job, he applied to the Faculté Polytechnique at the Université de Montréal.  He was admitted on the condition that he complete two essential courses, including the course in solution chemistry.

He subsequently drew unemployment insurance benefits for a period of time ending on November 10, 1988.  During that time, from March 1, 1988, to September 22, 1988, he took courses at the Control Data Institute, and then abandoned them.  Ultimately, in the winter of 1989, Lépine registered in and completed the solution chemistry course at the CEGEP du Vieux Montréal.
In addition, Marc Lépine applied to the Sûreté du Québec, on September 1989, for a firearms acquisition permit, which he was granted.

What I see from Lépine's history is that he had an evil, maniacal father who felt women should be subservient. Golly-gee-whiz PZ Meyers, ya think that maybe that had something to do with his murderous rampage?

Lépine tried to be successful academically, but if he did not flunk out he just quit his studies. He carried a lot of baggage from his childhood.  Lépine needed a proper support system and strong role models. On an individual level, he lacked respect and work ethics. His academic failures were his own fault. Rather than taking responsibility for himself, he blamed women for outperforming him academically. I have heard this story many times. When the person fails academically, they quit, say that the education is worthless anyway, or blame other people for succeeding at the things which they failed. He had an extreme narcissistic vulnerability.  People like this have a grandiose imaginary life. For Lépine, women represented everything contrary to his utopic world view.

Lépine was shy with women, wanted a girlfriend but felt awkward with them. This was a man with severe self-esteem issues. I think that dropping out of school, flunking classes, and making up excuses for his failures are substantially responsible for his low self-esteem. If I was a lazy blogger, like PZ Myers, I would say that all men with a low self-esteem are a bunch of low life, blood thirsty heathens. Making such a claim would be intellectually dishonest.

PZ makes insulting claims without implementing the slightest effort to understand what motivates people to do what they do.

It is no secret that I am not a fan of feminism or MRA. A Voice For Men published an article discussing the Marc Lépine tragedy, flipping the entire discussion onto women. (surprise, surprise) Somehow, some way, they have to make it a woman’s fault. Instead of discussing Lépine’s actions or what caused them, the author instead diverted the entire discussion, blaming women for everything including the hole in the ozone layer. “Women this, women that, women hit me with a baseball bat! Poor me! My life sucks balls because our society is feminized. Poor me, poor me, boo-the fuck- hoo.”

While PZ fails to think critically about Marc Lépine, the MRA angrily blame the women for Marc Lépine’s actions. The MRA article discussed how women are a bunch of murdering bitches, and the only reason we hear about Marc Lépine is because he is a man. Seriously? Then it goes into discussing things like divorce and child custody, topics that have absolutely nothing to do with what Marc Lépine did.  How exactly is the MRA any different from the Femi-nuts who refuse to take responsibility for their own lives, instead blaming men for everything? I fail to see the difference.

In conclusion, if PZ Myers is going to command any respect in the blogosphere he needs to step up his game. The MRA article, as misleading conspiracy theory-ish as it is, at least is longer than two paragraphs. Myers blog once again concerns itself with what he sees at a first glance, and does not delve into any real ideas.

PZ Meyer’s is a simplistic, lazy thinker. He appears to be the type of person who is very good at memorizing and regurgitating information. Moreover, calling everyone who does not buy his brand of feminism a heathen who wants to murder people is manipulating, sick, and incredibly shallow.

COMMENT POLICY: Freedom of Expression is given to those who stand up for what they are saying, not hiding behind anonymity. You must be a registered user, with a link to your Facebook page/ Youtube account/ or other social network where I can verify your identity.

Anonymous People: Your posts will automatically be deleted, and I WILL NOT EVEN READ THEM.